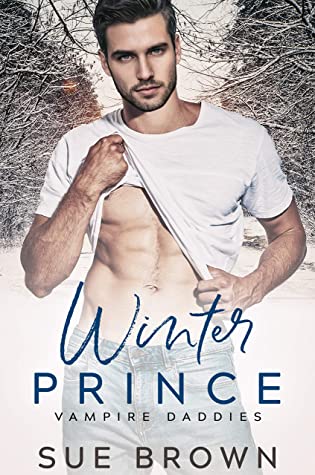 What does an ancient Vampire do in a twenty-first century world?Bite boys of course. But now biting is regulated, and boys offer themselves for cold hard cash.Fear hates the laws and policies and protocols of the modern world. He loves the thrill of the chase. The edge that fear puts into the blood of the prey.But he hasn’t met the one. His boy. The one he could nurture and would slake his hunger forever.It’s New Year’s Eve. Maybe it’s time to put himself to rest. For Eternity.But first it’s time for one last chase…

My Rating - 3.5 Stars!
Winter Prince is the first book in the Vampire Daddies series by Sue Brown. I never read vampire books, but I was hoping since it was Sue Brown, it wouldn't be heavy on the gore. And I was right!
Fear's a older vampire, tired of the rules forced upon his kind. Ready to give up, he's on the hunt for the one perfect feast. And then he meets Royale upon the death of Ryan.
The fun revolves around Fear's fated mate hating everything about vampires. Add in that the idea of "fated mates" is just a myth, as no one's every found one before.
What follows is a sweet tale that includes action and danger as well. It was strange that Fear allowed some things to happen, but I didn't real care, as it leads the storyline.
Winter Prince is a short, enjoyable read. I am excited to see what else Sue Brown has in store for this series.