Theme: Final Happy Ever After

It is not a standalone story.

This is an add-on final short novel to complete the District Line series.

The District Line consists of: Kick Off, Break Through, Come Back.

All books are available on KU, paperback and audio. And in a KU boxset. 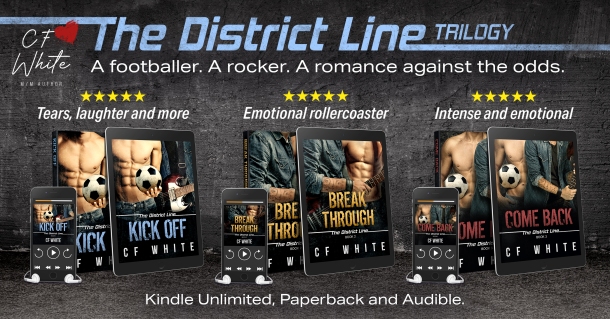 Used to the press, used to the public interest, and used to being just the two of them, they’ve forged a life juggling their high-profile careers with their low-key relationship. And it’s working. Mostly.

There are only two things left hanging that could elevate their contentment to perfection—marriage and a child.

Six years since bridgegate, and Jay’s spectacular proposal on the Millennium Bridge, the bill has now passed for legal same-sex marriage. It looks like they might be able to finally tie the knot, and the pitter patter of tiny feet isn’t as far flung an idea as it might have first seemed.

Until Jay has his first call up to play for the national team and must, once again, decide what’s more important—family or football.

My Rating - 5 Stars!
Extra Time, the fourth book in The District Line series is absolutely fabulous. I love this entire CF White series.

It's wonderful to see Seb and Jay happy together. This time around we get to see them approaching marriage and children. Yay!
It's no surprise that I love this part of their adventures. They feel like family by now, and they continue to make me smile and laugh. And cry too.
These two men always have their ups and downs, but their love for one another is never in question. They love one another fiercely and they will fight for one another till the end. They ooze love and chemistry, and I'm in love with this extended look into their lives.
If you've been following The District Line series, you will absolutely adore this finale. CF White has given their readers more than they could have ever asked for. Extra Time is just that, extra time for us readers to spend time with this wonderful couple! You won't be disappointed.
___________________________________________________

The short-lived peace broke when Seb announced through a wistful exhalation, “I want to have your babies.”

Jay slammed back against the wall, his head hitting hard, solid plaster. He’d feel that in the morning. “You what?”

“Let’s have babies, Champ. Let’s have little Jays running after their little footballs and little me’s rocking out on the guitar. Well, I’ll start him on the ukulele because, little hands. But by three I’ll expect to upgrade.”

“I know what you’re going to say. No womb. But, penguins, baby, look at the fucking penguins! We could do that. We could so do that.”

“Steal an egg?” Jay ran a hand over his brow.

Davies wriggled onto his side, the pillow sliding to the floor and an elongated grunt grazed his throat. Jay ignored him to await what Seb was going to declare next.

“We get given one.” Seb’s grin could be felt two hundred miles away and down the telecom system, only mildly preventing the need for Jay to kick the bloke in the next bed to him. “And we know our very own bitch whore!”

“Ann. Let’s steal her eggs and borrow her oven to cook them in.”

“She’s agreed. I already rang her.”

“So much for talking to me first before doing anything rash.”

“I didn’t impregnate her,” Seb declared in a mockingly accusatory tone. “That would be considered brash. Anyway, think on it. We’ll talk tomorrow. My programmes just started.”

“Night, Daddy. I love you.” Seb cut off the phone before Jay could retaliate with anything.

He wouldn’t have known what to say anyway. That was some head fuck. Babies. Seb wanted babies. With him. And plural. Yes, he’d mentioned it before, but he’d thought the bloke was flapping his lips like he always did. This was serious.

And if he’d already spoken to Ann…

He then noticed there was an unseen text that had come through during that conversation. He clicked on it.

Yes, you can have my eggs and borrow my oven. Love you. A

“Fuckin’ ‘ell!” Jay threw his phone on the bedside table and it landed with a loud thud.

Davies flung his eyes open. “Oi, Rutters,” he growled and tossed one of the pillows across the room. It slapped Jay in the face, waking him up from his momentary paralysis. “Some of us are tryin’ a sleep ‘ere, yeah? Keep the fucking noise down.”

Jay didn’t retaliate. He was too gobsmacked. Seb’s out of left field tackle had kicked him right in the gut and that was an illegal move. Little Sebs? Could he handle little Sebs? He couldn’t handle the big one most of the time.

Still, the thought tugged a smile from his lips as he slunk under the covers, closed his eyes and drifted off to sleep to the sound of snoring.

Brought up in a relatively small town in Hertfordshire, C F White managed to do what most other residents try to do and fail—leave.
Studying at a West London university, she realised there was a whole city out there waiting to be discovered, so, much like Dick Whittington before her, she never made it back home and still endlessly search for the streets paved with gold, slowly coming to the realisation they’re mostly paved with chewing gum. And the odd bit of graffiti. And those little circles of yellow spray paint where the council point out the pot holes to someone who is supposedly meant to fix them instead of staring at them vacantly whilst holding a polystyrene cup of watered-down coffee.
Eventually she moved West to East along that vast District Line and settled for pie and mash, cockles and winkles and a bit of Knees Up Mother Brown to live in the East End of London; securing a job and creating a life, a home and a family.
After her second son was born with a rare disability, C F White’s life changed and it brought pen back to and paper after having written stories as a child but never had the confidence to show them to the world. Now, having embarked on this writing journey, C F White can’t stop.
So strap in, it’s going to be a bumpy ride.