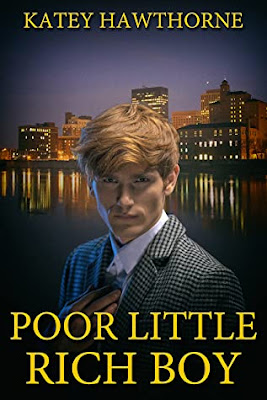 Ted MacTaggart's overbearing father is still trying to control his life, even from the grave. His will insists that, in order to inherit the family company, MAC Superior, Ted must be married by his twenty-fifth birthday -- and the marriage has to be "real." As in the board of MAC has to sign off on it.

Ted could fight the will, but then the handsome, artistic Ryan Costa, an old friend from school days walks back into his life, offering to be his groom-of-convenience. Ted draws up the contracts and Ryan, who has family medical bill problems, agrees gladly to the terms. Ted, emotionally walled off and afraid of his attraction to Ryan, also suggests they should keep their relationship strictly professional. Caring for people has always proven a weakness for him. Now isn't the time to start.

It's not long before Ryan's charm breaks through Ted's walls, but Ted isn't his own worst enemy in this case. Other forces are vying for MAC Superior, and even when their relationship is becoming the real deal, its shaky foundations land Ryan and Ted in trouble.

My Rating - 4 Stars!
Poor Little Rich Boy is a cute friends to lovers romance by Katey Hawthorne.
I have to admit the cover threw me. It doesn't match the title or the feel of the story. The cover seems dark and mysterious, or historical in nature. But the tale itself is modern, reads easily, and has a pleasant tone. It's easy to find this story compelling.
Ted needs to get married to keep his company. With a drunken agreement to fake marry his friend Ryan, the adventure starts.
What follows is a friends to lovers romance, as fake turns to real. They have to deal with family issues and a whole lot of biphobia. There are business issues to deal with and an ass of a brother.
The honeymoon is wonderful, with my favorite part being how it's a place that's a dream for someone with social anxiety. Love this. It's perfectly fitting for Ted to open up in such a place.
The author's writing is great, with a diverse set of characters, all well brought to life. The storyline is good, with plenty of sweetness and romantic discoveries included. Ryan's bisexuality is well illustrated, including the biphobia and assumptions of people around him.
The beginning had me sucked in, with the middle being a little slower for me. But the last third had me hooked again. With Ted being a closed off man at the beginning, his character growth leads this story.

Poor Little Rich Boy is a feel-good friends to lovers tale. This Katey Hawthorne read is perfect the next time you're in the mood for a closed off man opening his heart and finding love. It may have been with false intentions at the start, but it doesn't take long for their marriage to become real. 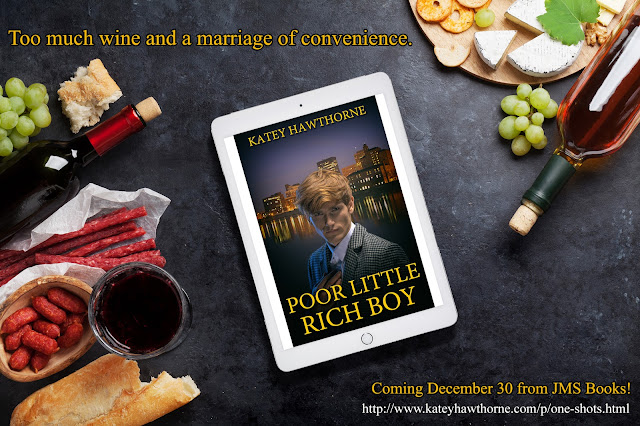 When he emerged from his bath—and took care of a few more intimate cleaning rituals after—Ted boldly wrapped his towel around his waist and walked directly into the biggest bedroom.

Ryan sat there, a bottle of red Côtes du Rhône open before him, one glass in his hand, looking out the window toward Sainte-Victoire. He didn’t even glance at Ted.

If Ted had been nervous before, he felt positively sick now. “You look pensive.” He wanted to go to the table and pour himself a glass—the wine was the most perfect shade of dark red. But he suddenly wished he’d put on his clothes instead of trying to be…whatever this was.

Finally, Ryan looked at him. His gaze slid slowly down Ted’s mostly naked body, paused at the bulge behind the towel, then moved back upward. Ryan sighed. “What is even happening here?”

Ted lifted his chin, though the flush that took his whole upper body would betray him and he knew it. “It looks like you’re drinking wine alone.” He started for the table, determined.

“Don’t do that,” Ryan said quietly.

Ted slid another wine glass over and started pouring for himself. He didn’t know what Ryan meant, and he already had too much speculation flying around in his head just then. Over and over. Non-stop.

One thing was for certain, though: he had misjudged Ryan’s intentions completely.

“Seriously, Teddy, have some fucking mercy, will you? One second, you’re telling me you liked the spooning, the next you’re avoiding me for two weeks before our goddamn wedding. I thought, okay, it’s Ted, he needs his space, it’s a big deal—I let it go. I see you smiling, I feel you kissing me like that at the wedding, and I think, okay, no, he’s into it. He likes me, he really likes me. Then you don’t even speak to me for a whole trans-Atlantic flight, you act like you barely know me as we’re heading toward the world’s most goddamn romantic villa—”

“Oh, you were distracted, okay, well, forgive me for thinking for one second that you might actually be having a feeling.” Ryan took a drink and somehow managed to make it look angry.

Ted, meanwhile, simply stood there watching, the blood draining from his face, leaving him cold. Many, many people, including his own family, had felt the need to comment on Ted’s supposed frigidity in his lifetime. In general, he was proud of it; he had cultivated it from childhood. But for Ryan to say it, when Ted had been trying so very, very hard to shake it off, to be open and honest, for possibly the first time in his so far emotionally pathetic life…

“You’re such a good actor.” Ryan looked out the window again. “I get it, now. It’s not all that easy for you. But the problem is, I get drawn in by it too, and I let myself think you’re finally going to give me a chance, and then it’s all gone the second we’re alone again. You’re totally shut off.”

“That’s…that is not true.” The violence in it surprised even Ted. “And you, of all people, should know it. How—”

“How dare I? Seriously? You’re gonna go there?” Ryan turned from the window, finally, set down his glass, and stood. His eyes flashed with the most unfamiliar of emotions: anger. “Do you have any idea how shitty the last few weeks have been for me? Trying to figure out whether you actually give a fuck about me or not, and in what way, and how I’m supposed to act to keep you from totally ignoring me?”

“And you think it was fun for me?” Ted snapped, stepping a little closer, chin still lifted.

“I pretended it might be.” Ryan glared. “To justify you totally ignoring my existence. But hey, whatever, it’s not a real marriage, not even a real friendship, so why should I expect—”

“Oh, fuck you, Ryan! And fuck real.” Ted blurted. “You know goddamn well it’s a real friendship; the only one I have, practically.”

Ryan rolled his eyes. “Poor little rich boy, no one to love.”

“You left it next to the goddamn wedding favors, you idiot. Almost like you wanted me to find it.” The thought was ridiculous, but Ted wanted to say it anyhow.

“Maybe I did!” Ryan’s voice rose. “And maybe I wanted you to think about me fucking myself while I watched them!”

Ted, startled by this admission, which was not at all the reaction he’d been expecting, could only reply, “Well, then you got your wish!”

For a beat that seemed to stretch just a little too long, they stared at each other, breathing hard. Then, Ryan said, “Tell me not to.”

But Ted said, “Fucking do it.”

Ryan pinned Ted’s back to the nearest wall so quickly his head made a thunking noise.

“Sorry,” Ryan breathed against Ted’s lips. He leaned in, hovering just half a centimeter off Ted’s body all over, both hands against the wall behind him.