One More Spin by Hayden Hall 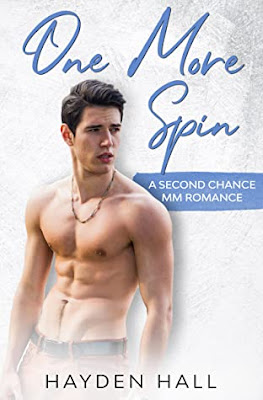 I’m snowed in with my crush. What could go wrong?Michael is funny, confident, and drop-dead gorgeous. He’s also straight. He made that clear five years ago when I kissed him.It was the last time he spoke to me. It took a continent between us to calm my aching heart.He danced back into my life now when nobody else could help me, offering a chance to be my friend again. Or is he offering more? Getting stuck in his mountain cabin is more than I can take.The snow won’t chill the ache. If we don’t get out of here soon, I might just do something stupid.He’s going out of his way to atone for the way he treated me and I feel my resolve breaking. I can’t always be the one doing the smart thing.Something stupid… Here I come.One More Spin is the second book in my One More Chance series, but can be read on its own. It includes second chance, forced proximity, gay for you/bisexual awakening tropes and no relationship angst. Steam runs high, but so does the sweetness. HEA is, as always, guaranteed.

My Rating - 4.5 Stars!
Hayden Hall's One More Spin is, for the most part, a sugary sweet second chance romance. I adore a good second chance romance, and this one definitely grabbed me from the start.
It all begins with an unwelcomed kiss and five years of no communication. But when Holden returns home, he gets an unexpected surprise when he sees Michael again.
The forced proximity aspect is well done, with a snow storm stranding the two men in Michael's cabin.  The attraction is mutual, and with some sexual discovery and sexual experimentation, the two are certainly hot together.
Once they talk, there is never an issue between the men. Their love is strong and their dreams are large. They seriously connect is an unbelievable way, but I don't care, as sometimes I want simple. The fact that their reunion is done without all the possible heavy angst, makes for a tender, low angst tale. As for the issues they have, those are with others, as they have to deal with both their families.
Holden's relationship with his father is heartbreaking. Homophobia, embarrassment, and a strained relationship. The two have a lot of healing to do. And then there's Michael's father, who's not only controlling, but is way too tough on his son. The way he treats Michael made me want to cuddle Michael and tell him he's worthy as he is.
The last part of the book, with their dreams coming true, is just adorably perfect. These men are perfect for each other and their tale is one made in the clouds. And I wouldn't want it any other way.
One More Spin is one of those easy reads that will leave you smiling. I enjoyed this Hayden Hall read a lot and definitely recommend it when you want an easy going developing relationship.
at January 20, 2021