Love Lost No More: A Contemporary Romance by Rachel Marissa 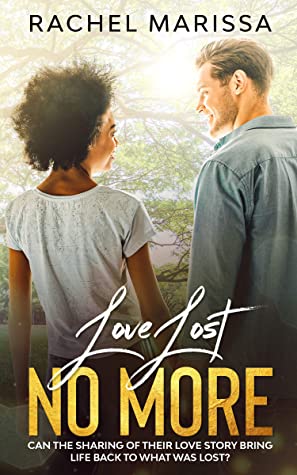 When a terrible event leads Richard Valentine back to his hometown, his one-time high school friend checks in on him, rekindling feelings that had confused them just a short time before they embarked on collegiate pursuits. Eventually marrying Sarabi, happiness was theirs. Pregnancy made it even more exciting and triplets an unexpected adventure.But life rarely sticks to the script. The future they’d planned together was shattered by Sarabi’s death shortly after bringing their two sons and daughter into the world. A single dad raising the trio, Richard had little time or energy to do much more than provide for his children. At eight years old, the kids are getting more curious about life and about their mother.Richard responds by telling them bedtime stories that reveal much more than he bargained for. From what Sarabi was like to if Richard would ever marry again, the bittersweet memories he relives to answer their queries refresh his pain, remind him of joyous times, and free him from the unease he’d had about talking too much about their mother. Join Richard’s family as they discover while love lost hurts, love also teaches and heals.

My Rating - 3.5 Stars!
Love Lost No More is a sweet and tender romance by Rachel Marissa.
I enjoy the way it's written in a How I Met Your Mother type style, with Richard telling his kids how he feel in love with their mother.
Their story follows their high school years, as their feelings become real and they struggle with society's expectations. Aka - racism, as Richard is white and Sarabi is black. Their tale includes other boyfriends/girlfriends and waiting to get on the same page.
Richard's father wants Richard to date a white girl. His dad is also just a jerk to him in general.
As for the present, the kids are cute, and lend some tender moments to the tale. Overall, it's a bittersweet read, as we know from the start that Sarabi has died. The end is precious though.
The writing is great, the storyline is good, and it's an easy read.
Love Lost No More is one of those sweet stories I am glad I read. I don't love it, but Rachel Marissa definitely left me compelled throughout.
at January 12, 2021