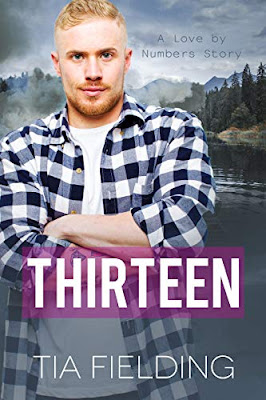 Deputy Mark Forrest and Nurse Francis Archer can’t deny the chemistry that arises between them. A chance meeting awakens the idea of something greater than either had ever imagined. Mark craves being able to let go, and Francis loves to take him out of his head. But Mark’s past bears a truckload of personal demons that have kept him in the closet and made him lash out at the LGBTQ community in the town he’s come to regard as home.Despite finding love and a new purpose in Acker, Francis’s new job might end up being temporary, and he doesn't want to lose the life he's settled into. Can the two of them build a future together despite a bitter past, and diverging paths?Trigger Warning: Abusive, homophobic, and racist language, light D/s, homophobia, vague descriptions of domestic violence and sexual abuse.

This novel is the third book in the Love by Numbers series. While it can be read as a standalone, the author suggests that you start from book #1, Ten, and go from there for the best reading experience.

Tia Fielding's Thirteen is a spectacular addition to Tia Fielding's Love By the Numbers series. It's a stunning tale of making amends; of taking control of one's life and feelings.

The third book in the series, it's easily read as a standalone. However, I highly recommend reading the first two books Ten and Four since they are stupendous as well.

Mark is a victim of abuse, leaving him both skittish and broken. He's been hiding firmly in the closet, causing him to have done some regretful things. Basically, the author does a stellar job with the exploration of internalized homophobia.

A chance meeting with Francis changes everything as Mark finds himself instantly calmed by the new man. The way in which Francis make Mark feel safe is beautifully written. After a hook-up, they end up in the same town together, setting off the fear of being outed, the need to hide, and the troubles that come when feelings get involved.

Both men are full of emotional pain. The depth of Mark's emotional pain and fear is astounding. The abuse he suffers from his toxic parents as they control too much of his life is maddening.

As for Francis, he's burdened by his past as well. I'm remaining vague here to not give anything away. I honestly wasn't expecting his past, and was impressed with the way it's developed.

The way that Francis recognizes Mark's submissive nature is fantastic, leading to some wonderful scenes.

The writing is superb, with two complex characters, an emotional storyline, and plenty to keep the reader invested. The author excels with creating the perfect small town feel, with helps drive this tale.

As for the meaning of the title, wow, just wow. It made me sick, had me crying, and I'm still in shock.

Thirteen has a tender sweetness that helps the reader deal with the seriousness of the storyline. It's an emotionally riveting tale of self acceptance and coming out, abundant with distinguishable character growth. And I absolutely love it and highly recommend it to everyone!