The Trouble With Tony (Sex in Seattle #1) by Eli Easton 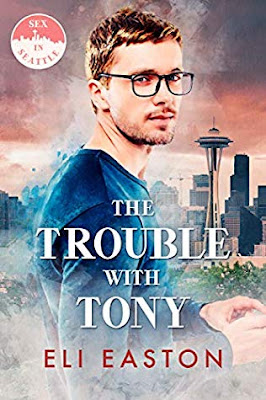 As part of the investigation into the murder of a young woman, Seattle P.I. Tony DeMarco poses as a patient of Dr. Jack Halloran, the therapist who treated the victim at a Seattle sex clinic. This isn’t the first time Tony has gone undercover, but it’s the first time he’s wanted to go under cover with one of his suspects. He can’t help it—Jack Halloran is just the kind of steely-eyed hero Tony goes for. But he’ll have to prove Halloran’s innocence and keep the doctor from finding out about his ruse before he can play Romeo. Dr. Halloran has his own issues, including a damaged right arm sustained in the line of duty as a combat surgeon in Iraq and the PTSD that followed. He’s confused to find himself attracted to a new patient, the big, funny Italian with the puppy-dog eyes, and Tony’s humor slips right past Jack’s defenses, making him feel things he thought long buried. But can the doctor and the P.I. find a path to romance despite the secrets between them?

Eli Easton's The Trouble With Tony is the first book in the Sex in Seattle series. From the start, this series that revolves around a sex clinic is fascinating.

Tony's a PI working undercover investigating Jack, a sex clinic doctor. So, yes, I knew immediately that this one had potential.


In this short, quick romance, Tony ends up working with Jack, discovering that he's demisexual. The author does a wonderful job demonstrating some of the aspects of demisexuality we rarely hear about, including confusion and fear.

The attraction and chemistry is strong between Tony and Jack, but they're conflicted by their doctor/patient status. The level of their longing and desire makes for an emotional read at times.

Both men are interesting characters. Tony's a complex character, confused by his lack of sexual feelings, torn between his job and his desires, and a man who desperately wants to feel again. Meanwhile Jack's job is unique, and his developing feelings for Tony have him torn between his professional oath and his personal desires.

The Trouble With Tony is a fun read which includes some light mystery and a little danger, along with a small amount of heat. Eli Easton has definitely left me wanting more, leaving me excited to read the rest of the series.