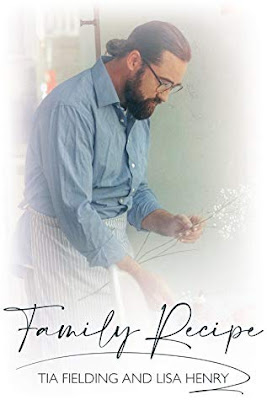 Justin O'Dwyer is 19. Four days ago, his mother died of a drug overdose, and now Justin is back in Enterprise, Oregon, trying to figure out how to raise the younger siblings he's afraid of losing to the foster system. Justin is completely out of his depth. Harper is six, and hates him. Wyatt is four and doesn't remember him. And baby Scarlett, at fourteen months, has never even met her big brother before. When Scarlett gets sick and won't stop screaming, and when Harper runs off in the middle of the night, Justin is at the end of his tether. In desperation, he knocks on a neighbor's door begging for help.Del Abbot is 38, and living in his grandparents' old place in Enterprise after his marriage broke down and he lost his restaurant in the divorce. He's a chef, even had his own show on cable for a while, but now he's looking for a new start, if he could just figure out what exactly that entails. When the O'Dwyer family barrels into his life one night, Del can't refuse to help. What begins as a trip to the hospital becomes a regular child-minding gig while Justin struggles to find his feet. And the more time Del spends with Justin, the more they both want more than friendship. But small town life comes with its own bigotry, and, in Justin's case, that bigotry has always been close to home.

When an act of violence threatens to destroy the small family they've built, both Justin and Del need to put aside their pasts and reach for their future together.

Family Recipe is a wonderful age gap book by Tia Fielding and Lisa Henry. Gripping from page one, this one has a 19 year age gap, and it's wonderfully explored.

Justin's a complex character. He left home at 15, needing to get away from his junkie mother. Now, at 19 he's back, trying to raise his siblings since his mother died. They barely know him, and aren't subtle about their angry and hatred. Luckily for him, his older neighbor Dell is around and able to help with the children, which he desperately needs.

What follows is an emotional story full of doubts and fears. The pain and fear of abuse jumps off the page at times. These are two men who seem to have a power imbalance, but they are equally able to lift the other one up, inspiring one another to a better life. It's a story of finding someone you love who can save you. It's impressive and beautiful.

Justin's backstory of being born into the bad family in town, a family full of drunks and thieves, is exceptionally developed and explored. I love the approach the authors took with this aspect.

The writing is amazing, the characters wonderfully complex, and the storyline absolutely riveting. This writing duo of Tia Fielding and Lisa Henry is fantastic, taking the reader on one hell of an incredible journey. The character growth is astounding in this hurt/comfort read.

Family Recipe is one of those special books that begs to be read in one sitting.

If you enjoy loveable characters who need a break in life, this one is a must read. And, wow, the mushy and heartfelt ending is perfect.