The Rise of Virginie by Katey Hawthorne 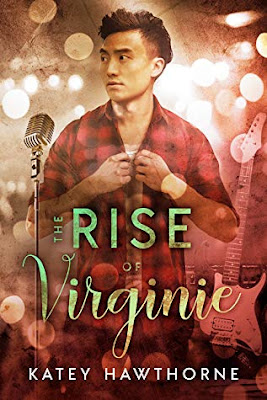 
Stefan Holt left home at nineteen, guitar in hand, determined that couch-surfing would be better than staying with his mother. He finally lands with Megan, an old band-mate, and they decide to resurrect their rock n’ roll dreams to get them out of their opioid-riddled small town. Unfortunately, neither of them is much of a lyricist.Han Westfall works at the local library, where he lives to rec poetry to the handsome, mysterious guy who brings in his guitar and stays all day. Han writes lines of his own, and when Stefan finally asks to see them, their musical chemistry clicks—and it brings them closer, faster than either of them imagined possible. They name their new band Virginie, ostensibly in honor of their Appalachian roots.They’ll have to work through band in-fighting, revenge porn, homophobic taunts, family addictions, parental drama, and their own inner demons to make things work, both in love and in music. But if they can make it, maybe they won’t just get out of town. Maybe they’ll rise up and take everyone with them.

The Rise of Virginie is a deep and thought-provoking romance by Katey Hawthorne.

The romance between Stefan and Holt is told around an excellent exploration of the opiad crisis. Their story involves a band, a geek, and lots of drugs. The men are complete opposites, one homeless, the other having been raising by a heartless couple. Adding to the fun, the reader is treated to some fun first times, as Han is a virgin.

The music aspect is a thrilling ride, as the music not only brings them together, but is emotional and heartfelt.

The opiod epidemic is a steady theme throughout, and I love the way the things are addressed in the end.

The writing is good, with two intriguing characters. I definitely fell for them, both individually and together. I enjoy the doubts that Han has, and the way Stefan breaks through his walls. Both men are creative in their own ways, which makes for a great read.

The Rise of Virginie is sweet and sexy. This Katey Hawthorne read doesn't disappoint, entertaining me throughout this emotional journey.