Secrets from the Edge by S.C. Wynne 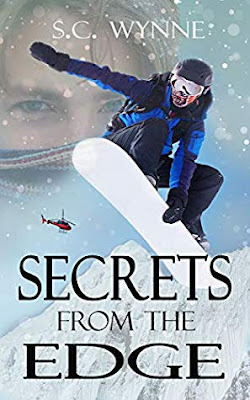 Once a rising super star in the competitive world of snowboarding, Keith Williams is grappling with the results of a horrible crash that almost wrecked his body and ripped his confidence from him. Four surgeries later he’s struggling with debilitating fear, but trying to hide it, even as he forces himself to fight his way back to his number one spot. Keith grudgingly agrees to take part in a snowboarding documentary his buddy is shooting. He hopes that the documentary will help entice sponsors to return and get him back on top where he belongs. Unfortunately, a reporter is also coming along on the shoot.Jesse Royce is a journalist embedded on the snowboarding documentary. Keith and Jesse have a past sexual relationship, but Keith knows he still needs to hide his lack of nerve from his ex-lover. Jesse is looking for a juicy story, and Keith can’t afford to let his guard down.Unfortunately, Keith’s loss of nerve isn't the only secret he’s keeping; he also has a dark, heartbreaking past he’d rather no one knows about. But no matter how much Keith hates it, no secret can stay hidden forever.Secrets From the Edge is a 53,000 word story about recapturing courage and learning to trust and love again. This is a re-release originally published in 2015.

Secrets From the Edge is a great sports romance, which is one of my favorite things to read. This SC Wynne story is sweet while also being very serious.

Keith's a snowboarder who's trying to get back to the sport after an injury. Adding to his stress is an ex coming to work with him as a reporter. The problem? Keith is closeted and does not want to be outed. On top of that, he's ashamed of his past, not wanting anyone to learn his secrets.

I enjoy the underlying angst of their conflict of interest throughout. After all, an athlete getting involved with a reporter sent to write about him isn't an easy ride.

This is a story with stellar character growth, as Keith learns about himself as well as his relationships with others. It's a fantastic story of reevaluating the benefits of friendship and love.

The teammate issues are a huge part of Keith's character development. I enjoy this, as we all know that there's always some jealousy involved. But it's his stoic nature that is his real problem with his fellow snowboarders. I absolutely love this aspect of the story, as what one sees as being self sufficient, another resents.


The writing is excellent, with stellar dialogue. The author expertly draws the reader into the tension and pull throughout. There are some great secondary characters who add a lot to the story.

Secrets From the Edge is an impressive sports romance. I definitely recommend it when you're in the mood for your next complex-athlete-falling-in-love story.