Trust No Alpha (The Omega Misfits #1) by Wendy Rathbone 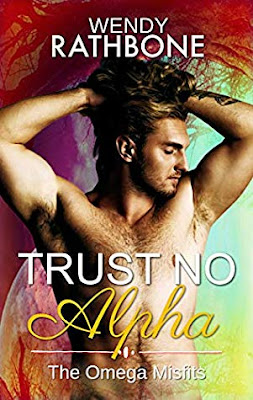 It’s a world gone mad. The Alphas are out of control.
When you discover you’re not who you thought you were, the nightmare begins.
KRIS
At age eighteen, life as he knows it is over for Kris. A secret to his nature he was not aware of has been revealed.
Now, kept as a prisoner in a locked room in the mansion of his wealthy father, Kris is at the mercy of Alpha laws and Alpha domination.
Things take a turn for the worse when his own litter mate threatens him, and his father starts behaving strangely around him.
Escape is his only hope. But where can he go in a world that allows him no rights?
THORNE
Marked as a dangerous Alpha, and living a secluded life alone and unloved, Thorne still grieves for the mate whose death he feels responsible for.
Years have passed, and he refuses to even try to function in normal society.
One day he discovers a young man on his property, disheveled, desperate, and scared. He acts like a runaway Omega, but he doesn’t smell like one.
What is this boy? And why does Thorne feel an immediate need to protect him? To bond him? To make him his?
A non-shifter, Omegaverse love story of rescue, first time, fertility issues and an HEA. Standalone read. 65,500 words. (While Omegas are birth-fathers in this universe, there is no on-page mpreg in this book.)

Trust No Alpha is an intoxicating omegaverse romance by Wendy Rathbone. From the start, the dynamics between alphas and omegas in this world are clearly defined, and it isn't pretty.

Chris was always the family's golden child, until it's discovered that he has both Alpha and Omega genes, rendering him useless. And desired. Oh dear lord, these scenes are not easy to read, establishing early on the intense emotions that will carry on throughout the story. A riveting twist on your typical Omegaverse read, I couldn't put it down.

Thorn has always been known as a murderer and is feared by all. His character development is fabulous, and will leave you madly in love with this broken man.
It is emotionally gripping throughout, as we follow these two troubled men and their developing relationship.

Adding to the fun, there's a 32 year age gap between the men. This aspect is extremely well done and adds immensely to their story.

Their story is a wild mix of neighbors, family issues galore, action, and danger. Seriously, it's an intense and wild ride. There's lots of romance, steam, passion and love as well. I couldn't put it down.


Told in alternating pov, the reader is sucked into both Chris and Thorn's feelings and taken on one hell of a journey with them. The writing is fabulous, with superb character development and even more impressive world building.

Be warned there's an attempted rape scene that is not an easy read.

Trust No Alpha is an amazing book. This Wendy Rathbone story is one that left me on the edge of my seat throughout. As the first book in The Omega Misfits series, I am excited to see what happens next.