Thorn in His Side by Helen Juliet 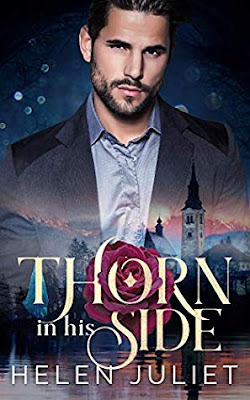 The last thing beautiful, inexperienced Joshua Bellamy wants is an arranged marriage with the terrifying Darius Legrand. But if Joshua wants to save himself and his family from being thrown onto the streets by Darius’s father, he has no choice. However, when Darius goes to extreme lengths to rescue Joshua from near-death, Joshua has to wonder if there’s more to his beastly husband than he previously thought. Former Captain Darius Legrand is used to being manipulated by his cruel father, but when Joshua is dragged into the feud between their families, he decides something has to change. Protecting Joshua is one thing, but Darius knows that falling in love can’t be an option. Someone so young and beautiful could never give his heart to an older ill-tempered brute like Darius. Joshua is determined to bring joy to Darius’s life again, and Darius refuses to let Joshua hide his sweetness from the world any longer. Over time, it becomes clear that despite their differences, their hearts are drawing closer together. But can happiness ever be possible for a rose and a thorn when Darius’s father will go to any lengths to see his deadly game through? Thorn in His Side is a steamy, standalone MM romance novel featuring tender bubble baths, a stubborn but loyal horse, thunder storms, enough healing touches to mend any broken heart, and a guaranteed HEA with absolutely no cliffhanger.

Helen Juliet's Thorn in His Side is a beautiful enemies to lovers romance.

This one started out slow for me, as it takes a while for the character interaction to develop. But once it does, I couldn't put this book down. The tension is there from the beginning, but the good part is when they break down barriers and start talking to one another.

Darius and Joshua meet when they're forced into an arranged marriage. Darius lives in fear of his father. His mother died, his ex lover died, and he suffers from both emotional and physical scars. Joshua's gay but he's never been with a man before. Thus, the reader is treated to some wonderful first times.

It's a stunning story of Darius finding someone who wakes him up, bringing him back to life. Their story is a reminder to live in the now; grab happiness while you can. It's a reminder that looks can be deceiving. Hell, Darius looks like he has it all, as he's rich and lives in a castle. But his life is one series of rough and tragic moments after another.

Their story includes one hell of a vindictive, controlling father. Oh, the rage I felt for him is unreal.


The writing is fabulous, with two lovable, well developed characters. It's a serious storyline that's mixed with some heat and steam. And, omg, the author went after my puppy loving heart by adding a Bichon Frise to the tale. Heart melted!

Thorn in His Side is tender and romantic, full of heartbreak. This Helen Juliet book perfectly entwines the good with the bad, as there's lots of danger and action. I couldn't put this riveting tale down.