The Mating of Michael (Sex in Seattle #3) by Eli Easton 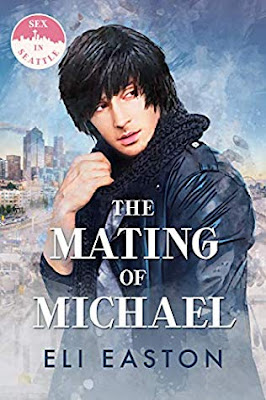 This is the 3rd book in the Sex in Seattle series, but it features a new couple and can be read as a stand alone.Everyone admires Michael Lamont for being a nurse, but his part-time work as a gay sex surrogate not only raises eyebrows, it's cost him relationships. Michael is small, beautiful, and dedicated to working with people who need him. But what he really wants is a love of his own. He spends most of his time reading science fiction, especially books written by his favorite author and long-time crush, the mysteriously reclusive J.C. Guise.James Gallway’s life is slowly but inexorably sliding downhill. He wrote a best-selling science fiction novel at the tender age of eighteen, while bedridden with complications of polio. But by twenty-eight, he's lost his inspiration and his will to live. His sales from his J.C. Guise books have been in decline for years. Wheelchair bound, James has isolated himself, convinced he is unlovable. When he is forced to do a book signing and meets Michael Lamont, he can’t believe a guy who looks like Michael could be interested in a man like him.Michael and James are made for each other. But they must let go of stubbornness to see that life finds a way and love has no limitations.


The Mating of Michael, the third book in the Sex in Seattle series, is just what I've been waiting for. After meeting Michael in the first two books, I have been excited for his story. That said, it's easily read as a standalone.

Michael's a sex surrogate, who loves to be needed. He doesn't have a fetish for helping people, but he loves that his clients need him. He has the purest of hearts, and is unlike any character I've read before.

Michael's new patient, James, is in a wheelchair due to having polio when he was young. He is full of trust issues, fear, and self esteem issues; feeling unworthy of love. James' backstory, told in flashbacks, is haunting, fully establishing his abandonment issues.

Michael working with James is beautiful. Honestly, the importance of what Michael gifts his clients with is unparalleled. It is amazing the way he instills James with love, confidence, and the feeling of being worthy.

The writing is wonderful, complete with multi-layered characters and a deep storyline. Told in alternating 3rd person pov, the reader is fully able to delve into the actions and emotions of both men.

The Sex in Seattle series is truly a unique and intriguing series. The Mating of Michael is both sweet and exquisite. This is a story you that will grab you by the heart and hold you hostage throughout. Enjoy!