Drawn To You by Jaclyn Quinn 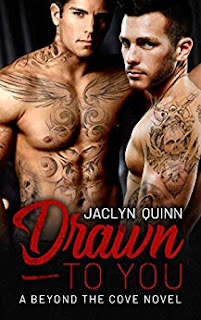 Leaving his enormous family behind, native New Yorker, Elijah, decides to move to Brighton Pier for a fresh start. Being part of a large LGBTQ community and landing his dream job at Inkubus, a local tattoo shop, is too big of a draw for him to turn down. But just when he thinks his new life is going perfectly, he finds out his burgeoning relationship is nothing more than a friends-with-benefits arrangement to the man he was swiftly falling for. Suddenly, everything that felt so right to him feels all wrong, and he wonders if New York, with his family, is where he is meant to be after all.
Jake has worked hard for the life he’s made for himself in Brighton Pier. His life as a bachelor is pretty set in stone. Running his own business and spending time with his family and friends is enough for him, or so he’s convinced himself. Though he’s met a man he cares for, he’s adamant about keeping his single life as is. He has his reasons for not wanting to commit to the beautiful man he’s irrevocably drawn to. He just hopes their friends-with-benefits arrangement will be enough to keep Eli in his life.
When tragedy strikes, and Jake’s world is turned upside down, his instincts lead him to lean on the one person who’s become someone special, despite his best efforts to try and push him away. Eli—unable to turn Jake away when a loss so great takes the strong man to his knees—steps selflessly into the void in Jake’s life, regardless of the toll it takes on him. As both men struggle to deal with their own emotional turmoil, their lives veering off course, they grow inevitably closer as the days pass. But even so, they are still left wondering—can two people, drawn together by tragedy, turn a devastating situation into a fresh start? Or is it too late for a new beginning?

I wish I could give Jaclyn Quinn's Drawn To You more than 5 stars. It's that kind of book.

It's a tear-jerking, emotional journey of two men finding their way. It's a story of fear, loss, love and family.

Jake and his employee, Eli, have been hooking up for some time now. But, while Eli wants more, Jake doesn't. Suddenly Jake's world changes completely in one moment, and Eli's the one who's there to help him.

Jake and Eli's relationship is wonderfully developed and explored. Their story is beautiful, tender, sad, happy, and more. They're two men who want different things from life. But, as we know, dreams can change, and desires can change.

Then there's Jake's nephews. Their emotional journey is exceptionally written, as it's realistic, developed with thought and care.

I absolutely love every second of Drawn To You. At it's heart, it's about family; the importance of making a family full of those who love you, support you and are there for you. It's about grabbing love while you can.