Santa On The Beach by Crystal Greene 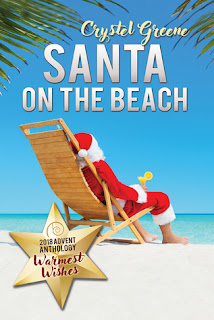 The sexy Santa and the virgin dad....Single dad Mario, twenty-one, has finally won shared custody of his five-year-old son, Sammy. They’re spending Christmas at a Tenerife resort to celebrate. The children’s swimming instructor, Josie, is sexy and fun, and Mario can’t stop dreaming about him. But Mario has no clue how to talk to a hot guy. With his suntan, Speedos, and rippling abs, Josie seems to be the typical jock. He’s super sweet too, and everyone loves him. But he only has eyes for the fire-eyed little dad who looks like his son’s older brother and won’t stop policing the swimming class.Sammy would like to be a king in the hotel’s nativity play. But he’s too afraid to go anywhere without his dad. Mario would like a holiday romance with Josie, or even a little more, but between building his tech company and trying to do his part as Sammy’s father he has missed out on a lot and is too inexperienced to know where to begin.Luckily Santa might have just the thing for everyone on his list...

Santa on the Beach is a fun and sexy Christmas romance by Crystal Greene.

Mario and his young son are at the beach. The very place where Jose is a swimming instructor.

Mario's an amazing guy. He's only twenty-one, and is raising his five year old son. My heart hurts for him, as everyone judges him, and he's in the midst of losing custody. He definitely won my heart quickly.

Jose is a wonderful guy, as he's perfect for Mario, but is also so good with his son.

Their story contains some hot and steamy moments.