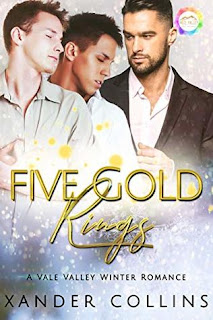 Chris and Jason thought they’d lost their way home, but wound up finding the exact place … and person … they’d been looking for.
A young couple--Chris, a beta, and Jason, an omega--come upon a small, snowy town that seems too magical to be true. Is it just the snow and the Christmas season that makes them feel like anything is possible? Or does that feeling really come from the knowledge that nothing is holding them back from a relationship they never could have imagined in their wildest dreams?
Rafe Montgomery has been single for over five years. He lives with his daughter, Grace, and some staff in his enormous mansion in the woods. As much as he tries to give everything to Grace, he still can't give her the comfort and security that comes with having both an alpha daddy and an omega daddy. But he's sworn off love after losing his cherished mate in an accident. When he sees Chris and Jason he's struck by something he doesn't understand, but soon realizes that the three of them fit together in a beautiful relationship he'd never even considered.
Five Gold Rings is the fifth book in a multi-author series about Vale Valley, a small town open to everyone in need of love and a home.  Each installment can be read as a standalone.
It is about a relationship between an older, tall, dark, handsome, and wealthy, alpha dom, a young beta sub, and a young omega sub. You will find incredibly hot sex between three men, male pregnancy, loads of holiday decorations and snow, and a very sweet, cuddly HEA in front of a roaring fire.

From the beginning, I knew I was going to love Five Gold Rings, by Xander Collins. The tone and story immediately had me hooked.

A young beta and a young omega find the perfect older alpha while on their vacation. It's sweet, it's super sexy, and it's a perfectly enjoyable read.

If you love mpreg, Omegaverse, and menage, don't miss Five Gold Rings. it is tender, beautiful, and full of emotion.