It Could Happen by Mia Kerick 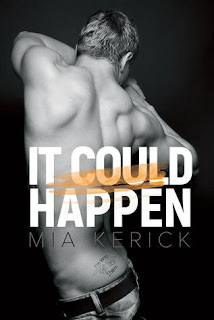 Three misfits, mismatched in every way—Henry Perkins, Brody Decker, and Danny Denisco—have been friends throughout high school. Now in their senior year, the boys realize their relationship is changing, that they’re falling in love. But they face opposition at every turn—from outside and from within themselves. Moving to the next level will take all the courage, understanding, and commitment they can muster. But it could happen.Henry is a star athlete and the son of religious parents who have little concern for the future he wants. Brody is a quirky dreamer and adrenaline junkie, and Danny is an emo artist and the target of bullies. Despite their differences they’ve always had each other’s backs, and with each of them facing a new and unique set of challenges, that support is more important than ever. Is it worth risking the friendship they all depend on for the physical and romantic relationship they all desire?In this unconventional new adult romance, three gay teens brave societal backlash—as well as the chance that they might lose their treasured friendship—to embark on a committed polyamorous relationship.

Mia Kerick's It Could Happen is a fantastic menage between three high school boys.

Three seniors, Henry, Danny and Brody, are best friends. Three young men, all different and facing their own issues. They struggle with their feelings for one another, as well as homophobia, religious parents, and more. The three realize they want to all be together.


This tale is developed well, in an alternating  journal and poem style by all three boys. We are given a clear view of each boy's feelings and struggles.

I loved this story, both because of the story itself, as well as the uniqueness of a menage with high schoolers.

Henry being closeted is well handled, as it's both realistic and gut-wrenching. He is damaged, as he wants the freedom to be himself, instead of being who his parents expect him to be. Some of this storyline is horrific to read about and will wreck your heart.

And Danny, oh dear lord, sweet Danny. The bullying he endures will positively wreck you.

As if it's not tough enough to be gay in high school, these three young men figure out they're gay, as well as discover their desire to be in a trouple. Yes, this plot hooked me immediately, but the delivery by Mia Kerick is superbly executed.

I highly recommend It Could Happen to any fan of Young Adult romance, as well as any fan of menage romances. It is simply beautiful.