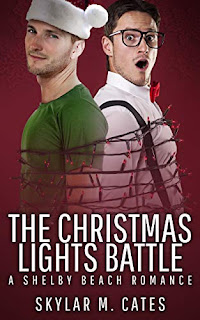 For a single dad and his neighbor, the Christmas competition is on!
Julian Moss wants to give his children a happy Christmas. Since his divorce, Julian has no time for a social life; he’s been doing the tiring work of two parents while his cheating ex-husband dodges his responsibilities. If that isn’t stressful enough, he has to deal with his new—and ridiculously good-looking—neighbor and his noisy dogs. Christmas used to be Julian’s favorite holiday, but lately all he sees is the cost. Then Julian’s young son tells him about a Christmas lights competition with a much-needed prize.
Leo Adams is going to be alone for Christmas…again. All he’s ever wanted is to be accepted by his family, but he knows that will never happen. Deciding to focus on his career as a personal trainer, Leo develops a boot camp program on the beach, but he needs publicity. The lights competition offers Leo a way to get some free press, and if it annoys his snooty neighbor Julian—all the better.
The battle is on, and both Julian and Leo want to win. The stakes are high, the reward is great, and the neighbors are in it to win it. There’s nothing like a little competition to make Christmas at Shelby Beach extra merry and bright.

The Christmas Lights Battle is a fun, pleasant Christmas romance. Don't let the title fool you though, their isn't much of a battle at all.

Julian meets his new neighbor, Leo, and soon they are battling each other for a Christmas lights contest, and falling for each other.

I love how nice they are to each other, both sweet and kind-hearted. And, of course, their sex is hot. Leo's bond with Julian's kids is also fantastic.

Definitely check out The Christmas Lights Battle for a quick, light-hearted Christmas story.