The Weighting Game by Declan Rhodes 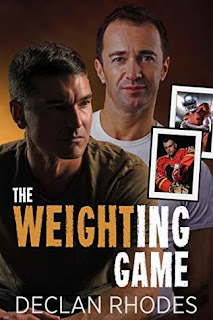 How do you save a life? For retired pro football player Gabe Finch, it involves a love for hockey jerseys, a battle to lose weight, and trash-talking his way into Logan Peterson's heart.
Logan was an ice hockey star. Selected as league most valuable player in four different seasons, he retired after fifteen years as an eventual shoo-in for the Hall of Fame. Then he took a break. It was his time to let down and enjoy life. He didn't know that the good times would catch up with him as a coach two years later when he found himself lying in a hospital bed after collapsing on the ice.
To all but those who knew him well, Gabe was the least likely of football quarterback heroes. He baited his teammates, bad-mouthed the media, and he was gay. However, with a football in his hand, Gabe achieved greatness. Three years after retirement, out of shape, overweight, and aimless, he didn't know where to turn for his next act in life. Then he met Logan.
Saving the life of the man he might love is finally reason enough for Gabe to commit to turning his own life around. The only hitch is Logan is divorced, has two daughters, and has never loved a man before.
The growing passion between them becomes too intense to ignore, and they both know they can't move forward without opening their hearts and letting them soar. A hush-hush weight loss counseling group for celebrities, current, and past, brought them together. Love, persistence, patience, and an iron will are all necessary to keep them there.
The Weighting Game is a standalone 55,000-word gay romance with first time gay, friends to lovers, and struggles with weight gain themes. It has steamy scenes and a happily-ever-after ending.

The Weighting Game is one of those books that hooked me immediately. To be fair though, this tends to happen often when I read a Declan Rhodes book.

I love athletes, so of course I love retired athletes. And having seen many retired players gain weight, this story just resonated with me a lot.

Logan and Gabe are two retired athletes who meet over the issues with their weight gain. Soon they're together all the time, trying to help each other. And they are so cute together.

The Weighting Game is a fun, sweet, and riveting story.