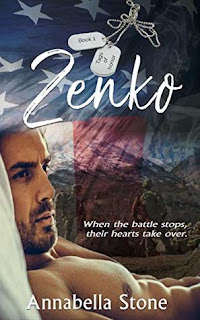 Finding an American civilian in a cave in Syria was not part of his mission brief. Zenko Marks, former Navy SEAL and member of the JSOC Task Force, has no idea who the mysterious man is, but he knows one thing for sure: he’s never left a man behind and he’s not about to start now—particularly one who looks at him with those stunning eyes. Shaun Jacobson thought his number was up. Getting captured while undercover was never supposed to happen but getting rescued was a statistical impossibility, especially when he technically doesn’t exist on paper. The last thing he expected was a knight in shining Kevlar to ride in to save the day. Zenko is like no one he’s ever met before and while Shaun knows he should keep his distance he can’t help but want the man who rescued him from hell. Can covert agents from two of the United States’ most secret teams allow their hearts to rule or will a joint mission between the teams cost them everything, their brothers and, worst of all, each other?

Annabella Stone's new series, Tags of Honor, is off to a great start with Zenko.

We meet Zenko and Shaun when Zenko helps to rescue Shaun. What follows is a fantastic, action-packed story that includes secrets, lies and deceits. We are also treated to some strong chemistry, as well as comfort and support, while offering help and protection.


As with Annabella Stone's other books, this one has all the style, action, and grit we've come to expect.

I love this story. The men are always on the move, treating themselves and the readers with some twists and turns, as the danger is always present. It's thrilling, riveting, and emotional.

Be prepared for a heart-breaking moment that will probably shock you as much as it shocked me. My heart literally dropped and I was frozen for a bit.

With Zenko, Annabella Stone has once again written an amazing story, leaving me feeling like I was there the whole time. I love her books, as her writing is absolutely phenomenal.