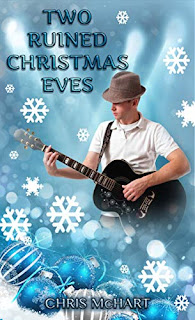 It’s Christmas Eve, and folk music star Jonas is on his way to the most important gig of his career: A folk music concert. Well, he would be if heavy snowfall hadn’t stopped him on the highway.
Fritz has to accompany his grandparents to the biggest folk music event in southern Germany, the worst punishment for a metal fan, especially on Christmas Eve.
When these two men meet at the concert after-party, sparks fly. Will this Christmas Eve be something special after all?
*The book has been previously published with a different cover*

Two Ruined Christmas Eves is a cute premise, as two men meet on a Christmas Eve that didn't go their way.  One hook up later and their night is salvaged. Their chemistry is good, and their sex is hot.

Their story is quick, short, but a fun read, leading to a nice happy ending, as both men want to date.