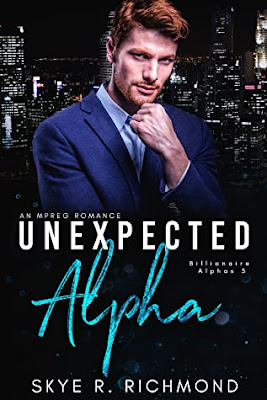 Aiden Cross needed money. Now. He had a set goal—build his company and make it an international success. So he made a choice very few alphas in his position would, but the gamble turned out to be worth it. The only problem was it left him offspring out there... somewhere.
A billion dollars and a health crisis later, and Aiden can’t help wondering about those children. He needed to know they are okay and leading happy, healthy lives…
He made the decision to track them down because life is truly too short, and they might be the only chance he has at finally having a family.

Quinn Parker met and instantly fell in love with his husband. Their one desire was a family, and they did everything possible to make it happen. Everything was finally going their way, and Quinn was blessed by getting pregnant times three.
But, then tragedy strikes, leaving Quinn pregnant and alone. How would he ever manage on his own... but then he quickly realized he had no other choice.
It had been all about his babies for so long until he meets him… Aiden.
Will Quinn let his guard down to the possibility of new love, or does he still long for the husband he’s already lost?
Will their budding relationship survive Aiden’s secret or will everything end before they have a chance at forever?
Aiden has one chance to prove to the man he’s falling for that he’s not just a means to an end.

It's definitely far fetched, even for an omegaverse story, but I still like it. Seriously, why would Quinn ever even agree to be his housekeeper? But, that aside...

When Aiden searches for Quinn, he never expects to fall in love with the omega. But Quinn is irresistible. Their story is one with children that tie the men together, and it's an enjoyable ride.

Unexpected Alpha, doesn't have a lot of development, but it's a cute story. It's fun and quick, and the kids are adorable.