Once a Girl, Always a Boy: A Family Memoir of a Transgender Journey by Jo Ivester 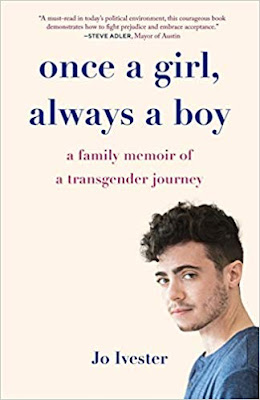 Jeremy Ivester is a transgender man. Thirty years ago, his parents welcomed him into the world as what they thought was their daughter. As a child, he preferred the toys and games our society views as masculine. He kept his hair short and wore boys’ clothing. They called him a tomboy. That’s what he called himself.By high school, when he showed no interest in flirting, his parents thought he might be lesbian. At twenty, he wondered if he was asexual. At twenty-three, he surgically removed his breasts. A year later, he began taking the hormones that would lower his voice and give him a beard—and he announced his new name and pronouns.Once a Girl, Always a Boy is Jeremy’s journey from childhood through coming out as transgender and eventually emerging as an advocate for the transgender community. This is not only Jeremy’s story but also that of his family, told from multiple perspectives—those of the siblings who struggled to understand the brother they once saw as a sister, and of the parents who ultimately joined him in the battle against discrimination. This is a story of acceptance in a world not quite ready to accept.

Once a Girl, Always a Boy is a marvelous family memoir of a transgender journey, written by Jo Ivester.

This story is an important one. Honest and heart-felt, this look back at Jeremy's journey, told by many standpoints, is wonderfully done. The reader follows Jeremy from his childhood to his 20's.

Jeremy was a tomboy for sure, but it was always more than that. Personally, I love the way his mother related to Jeremy's young years. Of course, this understanding leads to confusion later as Jeremy struggles to understand and explain his true feelings. And, damn, learning more about the journey of Jo herself, is amazing.

The author includes an informative look into the emotions, as well as work and legal struggles involved with changing one's gender legally. It's enlightening, not only for the way Jeremy's plights are explored, but also for the way his parents and siblings each explain their feelings.

I love, love, love this book and hope everyone has a chance to read it. And yes, tears were shed.

Once a Girl, Always a Boy is a book everyone should read. Too many people struggle with understanding why people transition, and this memoir will definitely help people to gain a better understanding. And of course, understanding leads to changing attitudes. I am a firm believer that stories have the power to create change, and this is one such story.