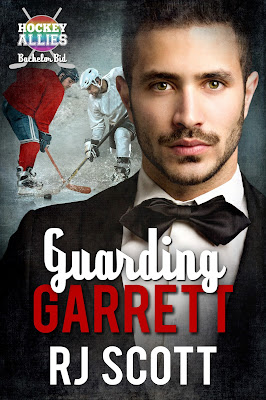 A hardworking, competitive, and skilled hockey player, Garrett is the cornerstone of the Burlington Dragons hockey team and one of the league’s most popular playmakers. Blessed with a face that delivers millions in endorsements, he has a legion of fans, and a future so bright that he is the envy of many.

When his internet fame puts him in danger, and a stalker threatens his life, the team hires Jason, a quiet but deadly former marine, to protect him. Danger is always close, but forced proximity means sparks fly, attraction burns, and somehow, resentment turns to love.

When Garrett’s stalker ups their game at a charity bachelor auction, there is a real chance it could mean the end for Garrett, but Jason refuses to leave his side whatever the risk.

These two stubborn men will have to fight to walk away from this alive, but their newfound love is worth every sacrifice.

RJ Scott's Guarding Garrett is not the typical hockey romance. Part of the multi-author Hockey Allies Bachelor Bid series, this one is a delightful bodyguard romance.

Garrett's a hockey player who's getting death threats, leaving him no choice but to get a bodyguard. Enter Jason, who's hired to protect him.

Their story is one of frustration, attraction, heat, and longing. They can only resist so long, adding to the fun.

The stalker story is well done, definitely giving off an eerie factor at times. It's a good plot device, keeping the need for separation throughout.

Told in first person pov, the reader is easily brought into the feelings of both characters. And these two have emotions in spades, including an impressive first kiss scene. The author entertains with plenty of humor sprinkled in as well.

As an avid fan of sports romances, for me it doesn't get much better than an RJ Scott hockey romance. Add in the bodyguard factor and Guarding Garrett is an awesome read. And just when you think you're done, you can move onto the next book, Loving Lane, by VL Locey! 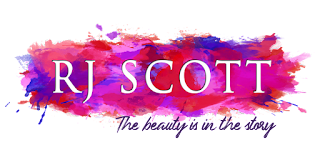 USA Today bestselling author RJ Scott writes stories with a heart of romance, a troubled road to reach happiness, and most importantly, a happily ever after.


RJ Scott is the author of over one hundred romance books, writing emotional stories of complicated characters, cowboys, millionaire, princes, and the men who get mixed up in their lives. RJ is known for writing books that always end with a happy ever after. She lives just outside London and spends every waking minute she isn’t with family either reading or writing.

The last time she had a week’s break from writing she didn’t like it one little bit, and she has yet to meet a bottle of wine she couldn’t defeat.

She’s always thrilled to hear from readers, bloggers and other writers. Please contact via the links below: