Out of the Blue by Kay Simone 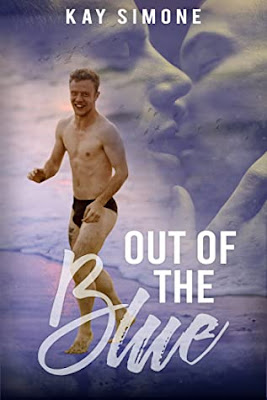 Michael seems like the perfect catch… But he’s also the boss’s son.When Geoff first moves to a beachfront cottage, he doesn’t mind being single. After all, it’s a small price to pay to focus on his career (even though his overbearing boss seems to hate him). But then young Michael—young, hot, and horny—appears, out of the blue.Older and tattooed, Geoff is exactly the kind of guy Michael’s dad is going to hate. That makes him hotter, right?Romance is the last thing on Michael’s mind when he meets the tough-looking, tattooed Geoff one day on the beach. Michael doesn’t bother hoping for anything more than a steamy one-time encounter with this hot DILF—not after everything he’s been through. He may be a survivor, but he knows never to expect good things in his life, or good guys.Sometimes, the island feels smaller than it is.Sparks fly when Geoff and Michael meet by chance in their insular island community. They can’t seem to keep away from each other, despite their age gap. But when Geoff realizes that he’s dating his boss’s son, their entire world comes crashing down, and Geoff must choose between his career and his relationship.You’re the only one who’s made me feel anything good since everything happened...There is something undeniable between Michael and Geoff, a connection that’s deeper than the mind-blowing sex. Can their bond grow into a life together on the island, or will Michael’s father do anything he can to snuff out the flames of their fire?

Kay Simone's Out of the Blue is a tender and emotional romance. We all know the type of story. Just when you find someone worth dating...

This story is one of making human connections; of opening one's and heart to someone else.

When we meet Michael, he's floundering, having no idea who he is. He's alone,  grieving his best friend, who he lost to suicide. His relationship is his father is awful, and life just isn't going to plan. One can't help by to immediately sympathize with the young man.

And then there's Geoff. He never expected to really date someone. I absolutely love the tattoos and how they are hidden from the world easily.

The contrast between the men is intriguing, making for a great storyline. The difference between appearance and reality is well explored. The disparity between perceived success versus actual success is extremely well illustrated.

Their relationship is one of with a large age gap. These are two men who have no idea of their complicated mutual acquaintance, as Geoff's awful boss is Michael's demanding father. And omg, that man is a total ass.

There story includes a camping trip, which is full of awkward times, misunderstandings, and a little too much alcohol. They are a couple who sizzle in the bedroom, but struggle outside of sex.

Michael and Geoff are certainly hot together; balancing one another well despite their obvious differences. There's some slight jealousy, fear, and a lot of confusion. The power of grief is also present.

I love that this is a story about the men first, and then their complicated connection afterwards. It's a nice twist on the forbidden relationship trope that they have things to work out other than the relationship conflict.

This quote is fantastic, something everyone can easily relate to. "You don't know how to miss a thing - or maybe even fully understand the thing - until you had the chance to miss it."

In all, Kay Simone's Out of the Blue is a excellent read. A compelling mix of insta love and slow burn, this book is sure to delight.