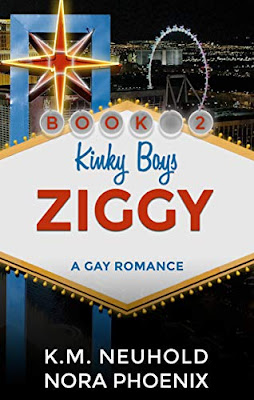 As far as I can tell I don’t have a submissive bone in my body. So why do I like it so much when Marshall calls me his good puppy?
I’ve made some impulsive decisions in my life, but signing a contract with the K Boys to shoot an Introduction to Kink series may have been the biggest impulse ever. Sure, the intimate part of it doesn’t faze me, but the rest is way more intense than I had expected.
Luckily, there’s Marshall, the consultant who oversees all the shoots. He’s so calm and steady, and he’s there for me when I panic. That doesn’t mean I suddenly like being tied up or something…until Marshall introduces me to puppy play. I want to be his good puppy…and much more because it’s hard not to fall for him.
But I still have a contract. I don’t want to disappoint my boss, and I need the money.
This isn’t a long-term career plan, Marshall is only temporarily in Vegas, and I may have made the biggest mistake of my life… Or have I?
Ziggy is a low-angst MM romance that shows a variety of mild kink, including puppy play. It’s the second book in the K Boys series and can be read as a standalone, though it’s more fun to read the books in order.

Ziggy, the second book in the Kinky Boys series, is another wonderful read by KM Neuhold and Nora Phoenix.

Ziggy is a story of finding someone who believes in you and makes you believe in yourself. Both authors excel in bringing all the emotions to this delightful story. This series is well done, with heart-felt emotional romances mixed with plenty of heat and kink.