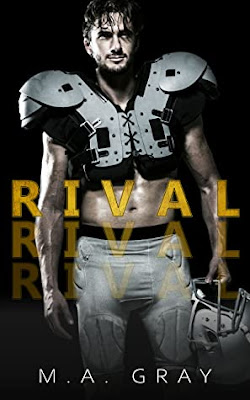 The last time I saw Grant Sullivan, I told him to leave Winter Harbor and never return.And now he's back.For good? I doubt that. Doesn't matter if he's the new coach of a rival football team. Doesn't matter if looking at him makes my blood heat, my pulse throb in longing. He's dead to me.Grant Sullivan is the first man I ever fell in love with.The man who stomped my heart into pieces.A beautiful liar.Grant Sullivan is, and always will be, my enemy.Rival is a standalone, enemies-to-lovers M/M romance with a HEA.

MA Gray's Rival is a fabulous read. From the start, I love the voice and tone of this second chance, small town romance.

Parker and Grant are two former best friends who have a slew of unresolved feelings between them. Not only do they have to deal with their personal issues, they are faced with coaching rival high school football teams.

Parker's a teacher and coach, who's stunned to discover that his former friend is back. He's closeted, and still hurt by the past. Grant is back in town after ten long years, a pro athlete recovering from an injury.

These two are dealing with so damn much pain and suffering, all of which I could feel jumping off the pages. The animosity and hatred is intense. Of course, hate and love go hand in hand, and this is no exception.

I love the sports , love the characters, and the aspect of past versus present.

This story explores the aspect of a closeted NFL player who continues to hurt those he cares about, as he caves into the pressure of what's expected of a pro athlete. We all know this type of story, and if you love this issue like I do, you'll find this one thrilling.

This quote just needs to be re-stated. "Life is not a single thread, It's many, many threads stretching between people, between places, between events." So true. And so beautifully stated.

And, oh my, the side story with Keon. Tears, so many tears. Happily, there's also hope and inspiration. I love this addition to the story.

The writing's great, with a tone that drew me in immediately. Written in alternating first person pov, both characters are fully brought to life.

I easily fell into Ma Gray's Rival and am still immersed in it. It will take me a while to get over this one. It's beautiful, tender, painful, and completely riveting. I can't recommend it enough.