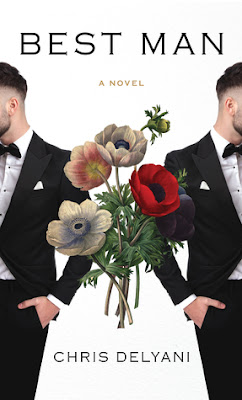 Frank Mercer is a forty-year-old high school math teacher, newly divorced from his husband and struggling to make his mortgage payments. He thinks his problems will be solved by a romance with his old friend Jonathan Butler, a man Frank has secretly admired for over twenty years. But Jonathan is engaged to Marcus Pierce, his unfaithful longtime boyfriend. When Jonathan asks Frank to serve as best man at his wedding, Frank must choose between supporting his friend and speaking from his heart.Julio Robles is Frank’s roommate and a popular yoga teacher. Julio’s star student is none other than Marcus, Jonathan’s fiancé and Frank’s nemesis. And Marcus has made it clear he’d like more from Julio than yoga lessons. When Frank asks Julio to pretend to be his boyfriend on a dinner date with Jonathan and Marcus, Julio can’t resist accepting the invitation. And finds himself in over his head.Frank and Julio invent a fake relationship in the face of Marcus and Jonathan’s all-too-real relationship. But which relationship is real, which relationship is fake? Their story leads them to ask themselves fundamental questions about love, friendship, and what it means to be true to one’s partner.


It's tough to describe Best Man by Chris Delyani. It isn't the best book ever, since all the men are flawed, and not very likable. But damn it, I couldn't put it down. For that, I am giving it 4 stars.

This tale involves best friends, roommates, and some serious cheating. There's an open relationship, where only one man tends to stray, and stray often he does.

In short, Frank's in love with his friend Jonathon, who happens to be engaged to Marcus. To save face, Frank pretends to be dating his border, Julio, who happens to catch the eye of Marcus. And this is how it begins.

This story involves jealousy, with one man desperately jealous of another, to the point of purposely trying to hurt him. Frank may just get his happy ending, but the path he travels is one of the most complicated paths ever. He has to endure a whole lot of mess before he's ever going to find real love.

This romance may just be one on going shit-show, but it was definitely an intriguing shit-show. It was a train wreck I couldn't look away from.

I find the cover to be interesting, as it would indicate a fun, happy romance, instead of this most complicated of romances. We certainly aren't laughing with this tale of dreams and longing, of pain and hurt.

Best Man is complex, with some horrible characters, but it's one of the most riveting books I've ever read.