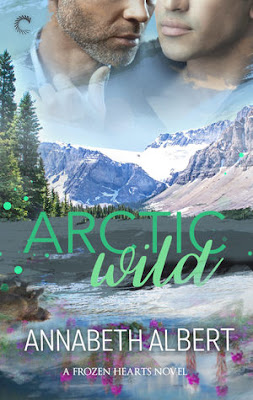 When a plane crashes in the Alaskan wilderness, the best place to land is in the arms of a younger man…Hotshot attorney Reuben Graham has finally agreed to take a vacation, when his plane suddenly plunges into the Alaskan wilderness.Just his luck.But his frustrations have only begun as he finds himself stranded with the injured, and superhot, pilot, a man who’s endearingly sociable—and much too young for Reuben to be wanting him this badly.As the sole provider for his sisters and ailing father, Tobias Kooly is devastated to learn his injuries will prevent him from working or even making it back home. So when Reuben insists on giving him a place to recover, not even Toby’s pride can make him refuse. He’s never been tempted by a silver fox before, but something about Reuben is impossible to resist.Recuperating in Reuben’s care is the last thing Toby expected, yet the closer they become, the more incredibly right it feels, prompting workaholic Reuben to question the life he’s been living. But when the pressure Toby’s under starts closing in, both men will have to decide if there’s room in their hearts for a love they never saw coming.

Annabeth Albert's Artic Wild, the second book in her Frozen Hearts series, is my first read of the series.

Reuben's a sexy silver bear who's attracted to his Alaskan tour guide, Toby. I love these two. A May to December couple, they know they shouldn't be attracted to each other, but they don't let that stop them. Take one man who doesn't do relationships and present him with a hot older man who happens to be a workaholic? Hell yes!

As the only ones on the tour, the two start to get close. Not only is the chemistry there, but the conversations are honest and real. Their relationship includes some funny moments, some scary moments, and some family issues. I love the differences between the men, not just age wise, but also personality and backgrounds. Watching them try to navigate these differences made for a fun read. In the end, it's a beautiful reminder to take some time to stop and smell the roses.

The writing is great, with an intriguing plot and a good flowing pace. There's plenty of sweet getting to know each other moments, some action, and some steamy moments. The atmosphere of Alaska is well handled, allowing the readers to get the feel of the land naturally.

I love Artic Wild and am hoping to go back and read the first book of the series.