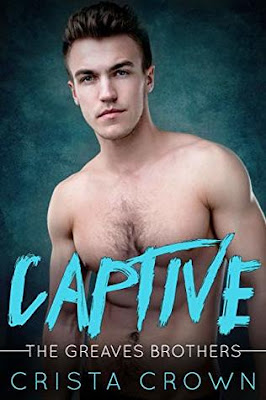 Camden has a tough shell. His history of neglect has taught him no one can be trusted, so he holds his foster family at arm’s length, and everyone else even farther. When a little flirtation starts up with his new boss, Brian, he has no expectation of that shell cracking anytime soon. Brian has already been down the commitment road, and he’d crashed and burned. He’s hesitant to start an office fling, but can a one night stand cause too much trouble? But the temptation of the forbidden relationship is too much, and soon the men find themselves sharing more than the expected—not just their bodies, but their hearts. But for their relationship to move further, Camden will have to share his deepest darkest secret… about the relationship that prompted the government to take him from his parents and the pregnancy he lost. Captive is the third in a contemporary mpreg trilogy of three men with broken pasts who became brothers, thanks to the only man who gave them a chance. It can be read as a standalone. Trigger warning for drug use. Warning! This book contains adult situations, with adults doing adult-only things, so 18+ readers only! Guaranteed HEA. Trigger warning: contains past references to miscarriage.

Crista Crown continues her Greaves Brothers series with book three, Captive. And it's a great ride.

Camden's a wanderer till he meets his new boss, Brian. As they start a fling, they aren't looking for anything serious. But, soon, their relationship becomes more than they expected.

Their romance is hot and intense. I enjoy their age gap, as they both bring different things to the table. Both men have tough pasts that have left them scarred. Only together can they overcome their fears and move forward.


My favorite line is "a touch of forbidden combined with a challenge? It was a trap tailor-made for me."

Camden and Brian's tale is one of risks and insecurities. The miscarriage issue is well developed and touched upon in a great manner. The mental scars are long lasting and have definitely effected Camden's mental state.

I also love the wandering aspect of Cam's character. We all know that person who keeps looking for his/her place in the world, making this part of Cam relatable. It's emotional seeing him finally find his home.

Captive's a beautiful and riveting story of two men who aren't looking for a relationship. Crista Crown's whole Greaves Brothers series is a lot of fun and worth a read.