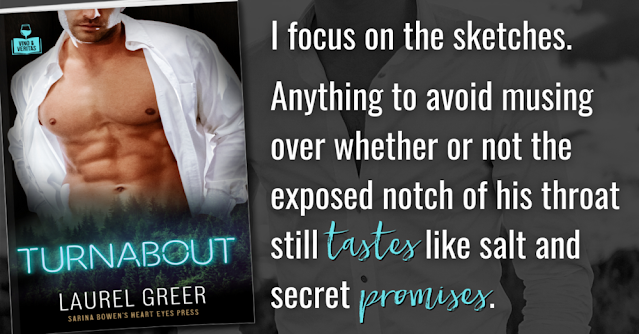 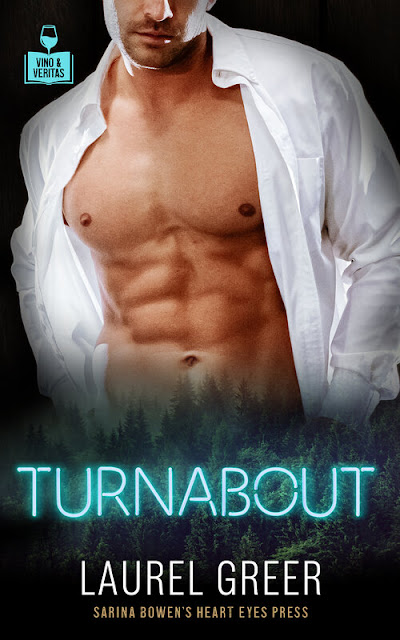 Release Date: May 6, 2021
Amazon Link   - Available in KU
Goodreads Link
Series Page
All the links in one spot

I don’t have time for an unplanned visit home to help out in my father’s struggling letterpress shop. My stint in Vermont will have to be short, for a couple of reasons:

One, I’m a busy executive trying to climb the corporate ladder.

Two, my ex is still my dad’s right-hand man in the shop. And I am not over him.

Nothing has changed at the Burlington shop. Auden still has his infuriatingly sexy Scottish accent. He’s still hot, and still stubborn. Between operating the antique press with his shirtsleeves rolled up, and moonlighting at Burlington’s hottest inclusive wine bar, he pushes every one of my attraction buttons.

My falling-in-love-again buttons, too. Except I’m his polar opposite. I love change, and taking chances. Everything he avoids in life.

So why am I trying to convince him to reach for more than we’ve ever dreamed of—the possibility of forever?

Turnabout is a second-chance romance with interfering family, groveling, and a large helping of artisan stationery geekery. 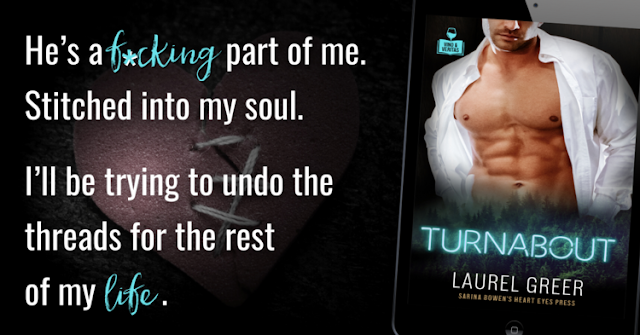 My Rating - 4.5 Stars!
Turnabout, Laurel Greer's contribution to the Vino & Veritas world, is
a wonderful, heart warming story. The ninth book in this multi-author series, it's read as a standalone.
Auden and Carter get a second chance in this sweet read, but their pasts are an obstacle and they live far apart, so it isn't all easy. Their story is one of men with different priorities, a lot of tension, and intense chemistry. Love their chemistry.
This story is wonderful, with the men finding their past and present starting to collide. I enjoy the way things develop and they start to find their feelings taking over.
I appreciate that their reasons for breaking up are understandable and valid. The author fully explores that people change and circumstances chance.
The writing drew me in immediately and I couldn't put it down. Written in alternating first person pov, I enjoy the way the men come to life. The small town feel is great, and I adore all the secondary characters.
Turnabout is a great read. This Laurel Greer book fits in well with the series as a whole, and is a wonderful addition. I highly recommend this book when you're in the mood for a small town, second chance romance. 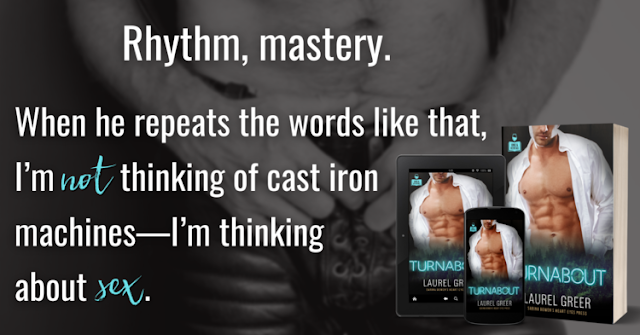 He lifts a dark eyebrow. “I said, I want to work with someone willing to wallow with paper and design. Tease out the one-of-a-kind magic.”

His voice is quiet, soothing. It demands I take a deep breath and get out of my feelings.

Rosy splotches bloom on his cheeks. “You know what you’re doing, too.”

“I don’t have the rhythm of it like you do. The innate… mastery, I guess. The relationship.”

Auden tilts his head and looks out the front window.

“I know, but hearing the words rhythm and mastery and relationship when it comes to using a press... I'm looking for locusts, frogs, horsemen—any sign of the apocalypse.”

When he repeats the words like that, I’m not thinking of cast iron machines—I’m thinking about sex.

I can’t believe he didn’t call me on how filthy that sounded.

He’s biting his lip, still a little pink in the face.

Meeting his gaze is like swimming in a lake, when you dive down, down on a bright day, and you have the dark depths below, and the streams of light from above, and it blends around you like you’re wearing a crown of green water and sunlight.

Holy fuck. He’s too much sometimes.

“Come here.” He crooks a finger for me to meet him at the Chandler and Price.

I join him anyway.

He takes my left hand and places it on the small shelf on the front of the press where we’d normally collect the cards during a run. The wood is smooth. And it would feel exactly like palming a flat piece of wood always does, except his big hand covers mine.

“Artisanry demands that relationship.” His voice is insanely low, but he’s only inches from me, so I don’t miss a syllable.

“You have the artistic talent. You just need a little patience.” He puts his other hand on my right hip and positions me square to the press. He taps his toe against my heel, a silent command to put my foot on the treadle.

“We’re missing some parts.” Paper. Ink. The frame. Everything that actually turns into a product.

“We’re not making anything.” He’s at an angle to me. If he leaned forward three inches, his dick would be pressed into my hip. His left hand is still holding mine to the shelf. The other is a heavy weight just below my waist.

“Just watch it, Carter.” He sounds amused. “You want to know every quirk. And not to try to learn when you’re rushing through eight jobs at once. When you have time to go easy.”

“Really,” he says. “Grip the wood with your other hand, too.”

“Grip the wood? You’re fucking with me.”

“A little.” I can’t see his face from where he is behind me, but I hear his smirk.

A little? A lot. I grab hold of the shelf anyway.

“Just work the treadle,” he says.

I press my toe into the pedal, making the flywheel whir.

The rollers, mesmerizing as they glide over the circular, iron platen.

“What color’s the ink?” Auden’s hand tightens on my hip. His breath tickles the side of my neck.

There is no ink.

“Green,” I say. I can’t get that sunlit lake off my mind.

My tie… Why am I wearing something meant to restrict my airflow? I want to loosen it, but Auden told me to keep my hands on the shelf, so I’m keeping my hands on the goddamn shelf.

“Hear anything in the flywheel?” he says.

Just the whir and clicks and whuffs it normally makes. “Should I be?”

“Nothing unusual, but the more you know the sounds of it, the more you know exactly when to feed the paper.” He taps the top of my hand once. Twice. Again. Matching it up to some sensory memory that’s so ingrained in him, he probably dreams in that rhythm.

Anchored by his touch, I’m the one who leans in the three inches. My shoulder, touching his chest. His breath, much more than a tickle. A caress.

“It’s a pulse,” he murmurs, so gruff, the consonants and vowels mix together. His fingers brush the hollow above my shirt collar. My knees wobble.

“A pulse.” I tilt my head to the side, exposing my neck.

“Aye.” Bending his head, his lips land on the same sensitive spot.

My head’s turning faster than the flywheel.

“See? You know the rhythm.”