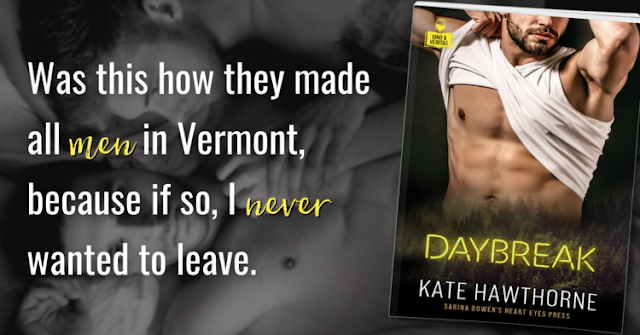 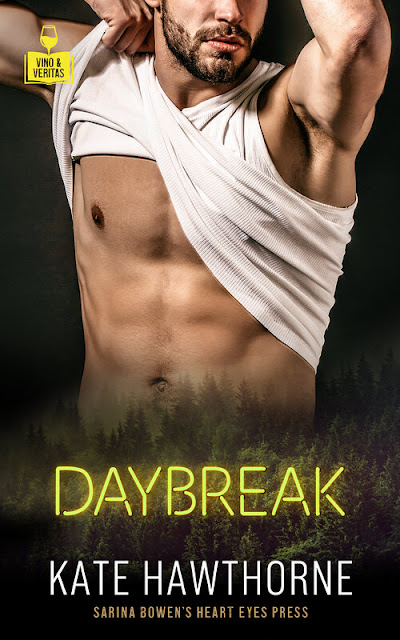 When a sunny young musician gets stranded with a grumpy mechanic during a snowstorm, a lack of heat is the least of their problems…

Liam Luckett is on an adventure. He's dropped out of his Master's program without telling his overbearing parents and set off on a road trip across the country. Armed with little more than his guitar, he’s looking for his best life. He never expected his car to break down in the middle of nowhere Vermont with a huge storm pending, leaving him stranded and at the mercy of a hunky local mechanic.

Jasper Cunningham is in a holding pattern. Three years after the death of his husband, he still hasn’t moved on. A hot, younger, stranded tourist is exactly the sort of complication this mechanic has been avoiding. But he also can’t leave him in the snow. He brings Liam home and lets him sleep on the couch. The air is heavy with more than snow, and when the power goes out, the two men become closer than either of them expects.

Every silken note Liam sings on that guitar thaws Jasper’s heart a little.  Suddenly, Liam’s itchy feet aren’t so eager to move on. When their feelings get too big to ignore, the bond they’ve formed is tested. Will daybreak leave them going their separate ways?

This opposites-attract, hurt/comfort romance features a grumpy widower who is only soft for one specific blue-eyed musician, a remote farmhouse, a friendly dog, and enough snow to knock the power out until love catches fire. 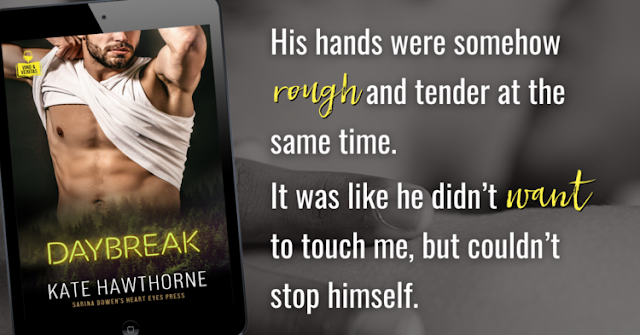 My Rating - 5 Stars!
Daybreak is the twelfth book in the Vino & Veritas series. This is Kate Hawthorne's contribution to this multi author series.
Liam and Jasper are just wonderful together. They meet during a snowstorm and get to know each other with some forced proximity. Yeah!
Both men are intriguing and well developed. Jasper is torn between his attraction to Liam, and his feelings for his deceased husband. Everything about his connection with Liam is fabulously done, as he has to decide between giving into a chance to love again or not.
As for Liam, I enjoy his journey. He's desperately torn between grabbing onto is own passions, or traveling the life his father expects of him. It's interesting and easy to believe.
They are totally wonderful together and I enjoy seeing the progress both make in their lives. And damn, I love that they bring completely opposite life experiences to their relationship.

Daybreak is a sweet and tender second chance at romance. Kate Hawthorne had me riveted throughout this romance. I highly recommend it. 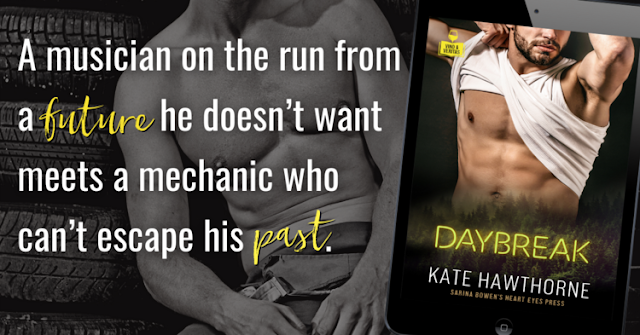 I reached up and wiped my face, and Liam laughed, standing up and

coming around the table. He batted my hands away and notched himself

between my spread thighs. He reached up and swiped his fingers over

my cheeks, looking down at me with eyes that looked a little scared and

“That’ll do,” he said, threading his fingers through my hair.

A rumbling groan fell from my mouth and I leaned into the touch. He kept

touching me, working his fingers from my hairline to the back of my head

over and over until I felt heavy and hazy with sleep.

“You were out there awhile,” he murmured, “considering you only crossed

I sighed and rolled my neck, pressing my forehead against his stomach

and bracketing my hands around his slender hips.

“I finished your car,” I told him.

“So…” His voice was barely louder than a whisper. “So, it’s all fixed, then?”

The confirmation had my chest tightening, my organs suddenly too big for

my ribs, the curved bones constricting around my lungs, my heart.

“You gonna take off?” I asked, even though the words sliced my tongue

as I forced them out.

“Uhm…” Liam joined his fingers together at the back of my head, tight

bodies together. “Not quite yet, if that’s okay with you.”

“Yeah.” I breathed in the smell of my soap on his skin. “That’s okay