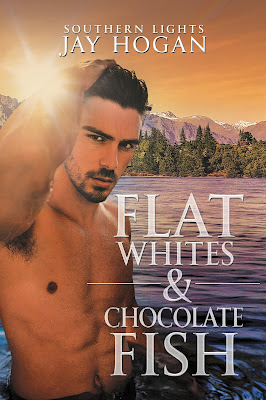 ADRIAN POWELL has a secret, a secret he’s guarded for 17 years. But it’s come at a cost—few friends, fewer lovers and a lifetime of loneliness. If he’s a bit grumpy and a tad pessimistic, who can blame him? So, exactly how he’s ended up with a bunch of nosy friends, a beautiful lakeside cottage and a successful business, is beyond him. It’s a life he never imagined, and one that includes a problematic new neighbour, NIALL CARMICHAEL–an irritating, equally grumpy, sexy as hell silver fox, who kisses like a dream, shakes every one of Adrian’s walls, and who might just prove Adrian’s undoing. But secrets have a way of catching up with you. And when Adrian’s past comes knocking, it might just threaten everything he’s built. 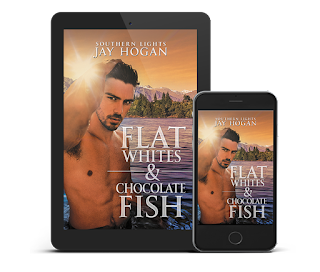 Adrian paused, horrified at the wide smile he was sporting. Holy moly. It was too late. The universe had cemented him into the friendship collective whether he liked it or not. “You know what?” he grumbled in surrender. “You’re right. It is my turn to be crapped on by all of you. But I won’t be going down without a fight, so be warned.”

“There’s the spirit.” Ethan laughed. “So, back to this bloody coffee shipment, then.” He blew out a sigh. “I think this one’s definitely for the pessimist’s list. You do the whole pissed-off-business-owner role way better than me. I cave at the first hint of officialdom, whereas you laugh in the face of a spreadsheet. My Jedi mind tricks don’t work on these guys. That was the deal, remember? I bring the charm, you bring the swinging dick.”

Adrian nearly choked on his tongue. “I’m not sure those were the exact words.”

Adrian could almost see the kid’s eyelashes batting. “All right. Good grief. Stop embarrassing yourself. I’ll call and sort it.” God knew how.

“You’re the best. See you tomorrow.” Ethan hung up so fast Adrian almost felt the draught in his ear, which left him with the distinct impression he’d been expertly played.

He glared at his phone, threw it on the passenger seat, tugged the hood of his sweatshirt over his head, and peered through the windscreen. The torrential rain had eased to just plain heavy, which anyway you looked at it still meant fucking wet. He threw open the door of the Everest, sprinted to the mailbox to retrieve its only contents—a sodden local newspaper whose editor wrote dubious commentaries on local events—lost his hood on the way back, and leapt back into the car to drip water all over his clean leather seats.

“Son of a miserable cock-sucking, perfidious dickhead.” He dried his hands on his jeans and threw the Everest into gear, only then remembering the truck at the far end of the drive. His jaw set. “Right, let’s see who this wanker is.”

He got to where the driveway split in two and came to a stop. There was no way he was getting round the corner into his property with the truck blocking his way. The cab was empty with no one in sight, and he wasn’t about to go swimming looking for the driver. A fitting end to a craptastic day.

He closed his eyes, sat on his horn, and waited. Like he could give a fuck. Someone would get sick of it soon enough.

“Hey!” A fist banged on his driver’s window.

And there it was.

“What the fuck are you doing, arsehole? Get off that thing.”

Adrian turned his head slowly to the right to make a point, and only then did he lift his hand from the horn.

“You’re in my way,” he shouted through the window and pointed to the truck.

The man had to be over six feet and stared at Adrian through the rain and the glass like Adrian had lost his bloody mind. Bring it on. He was bundled up in a calf-length black oilskin which hid anything of interest, hood up, scarf half-covering his mouth, leaving only a pair of irate, startling green eyes for Adrian to focus on. Which he did, because . . . wow, Adrian hadn’t seen anything so . . . green.

“What the hell’s wrong with you?” The man’s pissy tone shattered his interest.

“Move it.” Adrian jerked his head to the truck. “That’s my property.” He jabbed a finger toward his cottage.

The guy made signs for Adrian to lower his window, and after a few seconds, Adrian relented. Halfway down he stopped. The man angled side-on to the door, putting the rain at his back and sheltering the open window from the worst of it. It brought them within inches of each other’s faces. A pleasant hint of vanilla swept into the Everest, along with fresh sweat and rain. It smelled . . . good. Of course it did.

Adrian did his best to ignore it. “You’re blocking my drive.” He avoided those eyes and settled on the man’s chin instead. “I need to get to my house.”

“So I gathered,” the man replied testily.

Adrian made the mistake of glancing up and was hit by the full force of that award-winning gaze, which stripped all the sass from his tongue. Close up, the man was older than he’d first thought, mid-forties, give or take, and with a thick grey-flecked auburn stubble, a scattering of lines at the corners of his eyes, and a soft weathering to the skin over his cheeks and forehead. He might’ve spent time outdoors, but he looked after himself, and Adrian felt the sudden need to know exactly what that skin would feel like under his fingers.

He couldn’t see the man’s hair because of the hood, but he imagined it had the same reddish tinge, stippled with silver. With a dry swallow, Adrian supposed the man would be considered attractive, to some—in that silver-fox, fuck-the-world, I’d-be-so-good-to-you kind of way. Not something that Adrian had ever found hot, though. Nope, not him.

“I think the whole damn neighbourhood ten kilometres back into Queenstown understands your need to get to your house.” The man was clearly biting back a smile.

“I’m Niall, by the way. Niall Carmichael.” He offered a wet hand through the half-open window. “Nice vehicle.”

Adrian stared at the hand for a few dripping seconds before finally shaking. “Adrian Powell.” The grip that engulfed him was strong and surprisingly warm, considering the rain and the dismally low mid-September temperature. “Only had it a couple of weeks.”

Yeah, well, it wouldn’t be Adrian’s anything if it wasn’t black: it was his favourite colour, and he was about to say just that when he caught Niall’s eye and frowned. Niall wasn’t looking at the car. He was watching Adrian . . . closely. Adrian, dressed head to foot in . . . black. His cheeks heated and he opened his mouth to say something, who knew what, but Niall had already moved on, and Adrian figured he’d only imagined it.

“If that’s your house”—Niall nodded towards Adrian’s property—“then it appears I’m your new neighbour.”

Four words and Adrian’s world fell apart. “N-neighbour?” He could barely get the word out as he reeled at the very notion. The lake frontage behind the two properties had been his private domain since he bought the cottage. His. Alone. Not another house on either side for a good kilometre. They were the last built in the area, the council running scared of the increased flood risk from the lake in heavy rain. Steep mountain ranges fell almost vertically into Lake Wakatipu and the rivers feeding it. And with only one outlet, flooding was a given.

“You mean you bought that thing?” Adrian gave a shaky laugh, trying not to reveal exactly how badly the news had affected him. “Well, good luck to you, man. The place is held up by little more than a few nails and some wishful thinking. And it doesn’t solve my problem, does it? Your truck’s blocking my way.”

“And it’s not going anywhere.” Niall glanced at the offending vehicle. “The back wheel is stuck.” He stood back, giving Adrian an unobstructed view of the truck’s rear wheel buried to its hub cap in a mud puddle.

“It’s a pain, I know.” Niall did look somewhat apologetic, but Adrian wasn’t buying it. “But as you so kindly pointed out, the place is a dump. My plans are to renovate the house and garage into common areas for guests, the kitchen, and manager’s accommodation, and then add six luxury suites facing the lake to take in those spectacular views. This is an amazing spot, right? You were lucky to snag the cottage.”

I was. But renovation? Suites? What the fuck?

“The council won’t allow any more land division, so I guess it’s just us.”

“Anyway, it means there’ll be quite a few deliveries this side over the next few weeks, so . . .”

“You’re renovating?” Adrian hadn’t got much past that and the six accommodation suites before his heart damn near skittered to a complete stop. He couldn’t keep the horror from his voice, his mind flying ahead to endless days of hammering and grinding and concrete mixers. And, after it was all done, people, goddamn people, coming and going and just being . . . people. Jesus, what had he done to deserve this.

I am a New Zealand author writing in m/m romance, and romantic suspense. I have traveled extensively and lived in the US, Canada, France, Australia and South Korea. In a past life I have been an Intensive Care Nurse, Counselor, and a Nursing Lecturer.

I'm a cat aficionado especially of Maine Coons, and an avid dog lover (but don’t tell the cat). I love to cook, pretty damn good, love to sing, pretty damn average, and as for loving full-time writing, absolutely… depending of course on the day, the word count, the deadline, how obliging my characters are, the ambient temperature in the Western Sahara, whether Jupiter is rising, the size of the ozone hole over New Zealand and how much coffee I've had.

Welcome to my world.