Edge of Forever by Barbara Elsborg 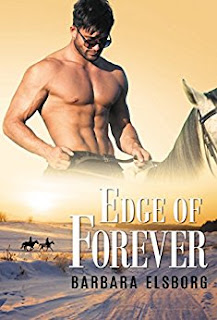 
Blurb:
When you stand on the edge, you might just find yourself falling.Teaching Russians how to be cowboys? Levi thinks his father is joking when he tells him that’s what he wants him to do for the next six months. Working in the frozen desolation of southwest Russia he’ll earn enough to buy a new barn for their Montana ranch. But there’s a deeper agenda for sending him to the edge of nowhere. It will stop him sloping off on Saturday nights to gay bars and clubs for threesomes with strangers.Pasha finally pushes his father too far and is banished to a remote ranch in the middle of a snowy Russian winter. Stripped of all the trappings of his privileged Moscow lifestyle, he has nothing at his disposal but a suitcase of designer clothes and a whole lot of sass. Pasha hates the countryside, hates physical work, hates the cold and hates cows. But de-prived of money, phone, and access to anyone who might help him, he’s screwed and not in a good way.Levi’s counting down the days till he can return to the States and his Saturday night hook-ups. Then Pasha arrives at the ranch wearing eyeliner, retching every time he walks into a barn, and Levi is amused, irritated—and attracted. After a vicious attack on Pasha throws them into close quarters, both men are forced to re-evaluate not just who the other is, but whether they truly want to return to the lives they left behind.When you stand on the edge, you just might find yourself falling in love.

I had no idea what to expect going into this book. Reading it, I was wowed!

There is so much packed into this beautiful story!

Two men, Pasha and Levi,  each sent to a remote ranch in Russia by their fathers.  Neither man wants to be there.

When Posha arrives, no one even talks to him. He wears eye-liner and just can't fit in with this group of cowboys. And one guy in particular, starts bullying him. Things are really ugly and dangerous for Posha for a time.

The two men aren't a likely match, as Pasha is openly gay and Levi fears being out. His family would never allow it. In the past he was even subjected to conversion camp. He was raised hearing his brother telling him to pray the gay away. So, when they do hook up, it is all done in secret.

They start to get closer though, and their time together as a end date, which is quickly approaching, as Levi is headed home to the states.

Add in the drama caused by a very determined ex who was abusive, dealing with the Russian police, expired visa, blackmail, and the two fathers who exiled them there in the first place.  As I mentioned before, there is a lot happening.

Both men are just so damn lovable. The author does a terrific job of building their backstories and making us fall for these two men who have been through so much in their lives. My heart absolutely broke upon learning all that Pasha had to endure. So much is explained about these two men and we have a wonderful understanding of who they are and what makes them tic.

The romance between Pasha and Levi is amazingly touching. Watching these two men go from a just-sex relationship to basically not being able to live without each other is enchanting.

A favorite part of mine is their banter. It is fantastic throughout the book. In fact, at the end of the book, their banter just made me so happy.

I am so glad to have stumbled upon The Edge of Forever. I absolutely enjoyed every single second of it. I highly recommend it when you are in the mood for a packed, romantic story.